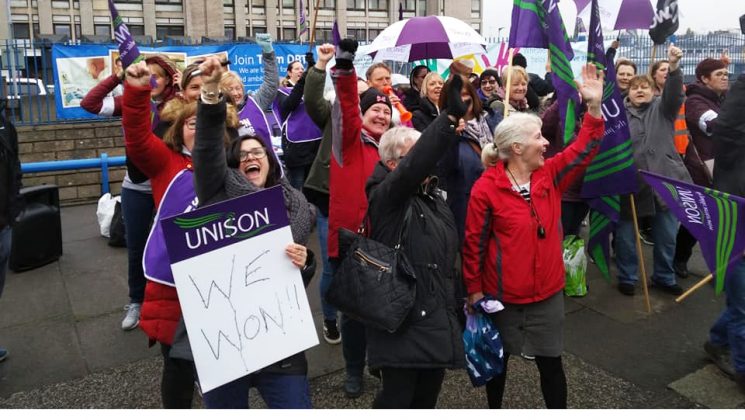 After two days of industrial action Sodexo have reached agreement with Doncaster and bassetlaw teaching hospitals NHS foundation trust, to pay the Agenda for change pay deal in full.

UNISON Full time organiser Sue Cookman said” we need to agree some finer details with sodexo later on this morning, but I am delighted that an agreement has been reached.”

UNISON won all terms with no concessions from the other side and did it in 48 hours!

“This is down to the sheer determination of these members UNISON and GMB, that they will stand together to fight what what they are owed.”

“The energy and enthusiasm on the picket lines at Montagu and Bassetlaw hospitals and Doncaster Royal Infirmary has been amazing, and the support from the public has been heartwarming.

These workers are NHS workers through and through, their commitment to the NHS is unwavering, no matter who employs them.”

“The government needs to properly fund the NHS pay deal for all NHS workers including those who have been outsourced.”